In 1974 people carried dimes to make calls from payphones and copies were made on a mimeograph.

A lot has changed, and so has ACH. The network continues to grow and provide greater services to consumers and businesses. But first, a look at how it began.

The real roots go back to 1968, when a group of California bankers became concerned about the growing volume of paper checks. They feared it could outpace the technology and equipment used to clear those checks. So they formed the Special Committee on Paperless Entries, or SCOPE.

Around the same time, the American Bankers Association sponsored a study looking at ways of improving the nation’s payment system.

These events led to the 1972 formation of the first ACH association in California to handle electronic payments. Other regional ACH networks soon appeared and in 1974 they formed Nacha to administer the ACH Network.

As administrator, Nacha sets and enforces the rules for ACH and educates people about the network. What it doesn’t do is operate the physical network. That’s up to the ACH Operators: the Federal Reserve and The Clearing House. They do the actual processing and routing of transactions—“moving the money,” if you will. 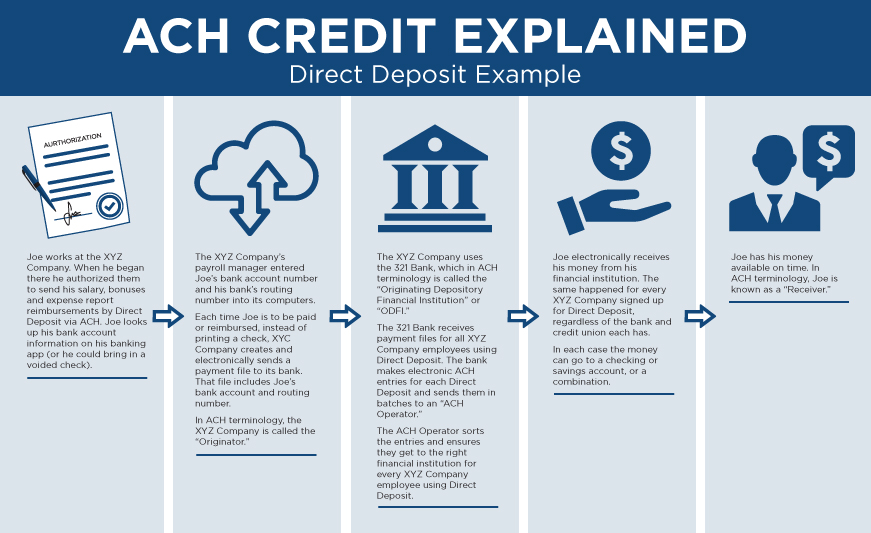 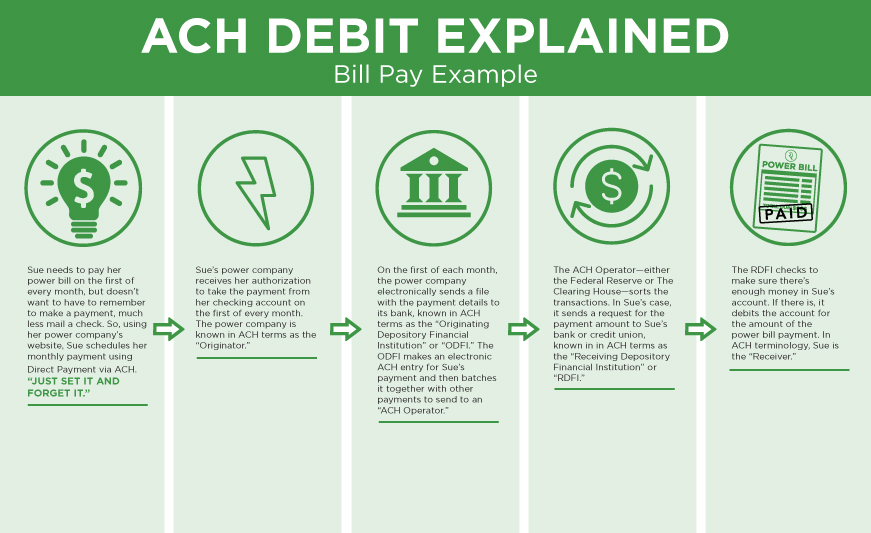 Nacha’s establishment led to the first national ACH rules being drafted, and that in turn paved the way for the very first standard ACH format for Direct Deposit. The U.S. Air Force soon became the first employer in the nation to initiate a Direct Deposit payroll program. Today, Direct Deposit is so popular that it’s the way nearly 93 percent of Americans get paid.

The Social Security Administration began testing Direct Deposit in 1975. We’ll never know if those pioneers expected to see that today 99 percent of SSA’s payments are made by Direct Deposit, thanks in no small part to several celebrity endorsements you may remember such as this one by actress Rita Moreno:

While government payments gave ACH a big starting boost, other uses have developed over the years.

Ever write a check and wonder why you never saw it canceled? It was electronically converted, a process the ACH Network enabled nearly 20 years ago. Innovative at the time, today virtually no one ever receives back a canceled check, regardless of how it was processed.

And in 2001, ACH payments initiated on the internet and by phone became available, providing Americans with ways to pay bills and make other payments electronically without writing checks.

Nacha continues moving the ACH Network forward to meet ever-growing needs. One of the biggest undertakings has been implementing Same Day ACH. Its benefits are many, including quicker payments of insurance claims for consumers and the ability for businesses to make emergency payrolls and faster expense payments.

Phase two of Same Day ACH arrived in September 2017, allowing debits, which enabled the same-day processing of virtually any ACH payment. This enhancement was also a success. In October 2017 there were 4.2 million debits with a value of more than $3 billion. Credits had grown by then to 5.8 million payments totaling more than $6 billion.

In September 2019, an enhancement meant availability of funds for both Same Day and traditional ACH may occur earlier in the day. In March 2020 the Same Day ACH dollar limit per transaction rose from $25,000 to $100,000. And March 2021 will bring a two hour extension to the time that Same Day ACH payments can be submitted to the ACH Network.

Another major step for the ACH Network was the federally mandated healthcare EFT standard, which took effect in 2014 and was enable by the Nacha Rules. It requires all health plans to pay healthcare providers by a standardized ACH payment at the provider’s request. In 2020, 361.7 million ACH electronic funds transfer (EFT) payments were made from health plans to healthcare providers, a growth of more than 100 percent since its inception in 2014.

Why You and Your Customers Need to Have the Rules The payments industry continues to evolve. To stay informed on the changes, all Network participants from businesses to customers benefit from the annual refresh of the Nacha Operating Guidelines. Get ready for 2021 Rule amendments including the…
September 22, 2020

ACH Can Help Transit American consumers and businesses make tens of billions of payments directly from their bank accounts each year using ACH. Most transit agencies operate on tight budgets, and with COVID-19 causing huge drops in ridership (and fare collections), every dollar counts more than…
September 15, 2020

As the coronavirus pandemic raged across the country, the U.S. government turned to Direct Deposit to deliver hundreds of millions of stimulus payments to Americans, not once, but twice.  The IRS reported that under the CARES Act, 122.5 million EIPs were made by Direct Deposit. When a second…